We got up this morning, did our morning chores and headed out for another adventure in southern Arizona. We had heard about a place called the Organ Pipe Cactus National Monument and decided we wanted to see it. We had to back track about 60 miles west on I-8 back to a place called Gila Bend, where we turned south on highway 85. That took us first to a town called Ajo, a very beautiful old Spanish town, see photos. About 10 miles further on we came to a place called Why, and in fact that was my first question. Why would someone name a town Why? So we stopped in at the Why Not Travel Center, which seemed to be the only building in town although there were signs that someone was about to put up another building. To that a similar question occurred to me. Why build in Why? I was prepared for a wonderful historical story attached to the name, but I was disappointed. It seems that the Post Office required that they have a name, so because there is a wye junction there, the store owner decided to call it Why.

So I decided to see if I could determine the origin of the name Ajo. The Spanish word is translated into English as garlic. I may have some difficulty finding out how Ajo got its name. If I am successful I will put it in a future blog.

We finally arrived at the Organ Pipe Cactus National Park. I have to say we saw a few Organ Pipe Cacti, but by far the most common plant in evidence was the Saguaro. I wrote about the Saguaro in a post a few days ago but did not have any photos. I now have photos in abundance. I also have some photos of Organ Pipe Cacti, and Cholla Cacti (jumping cactus). If any plant rivals the Saguaro in sheer numbers here it is the Cholla. The reason it is called a jumping cactus is that it has these very sensitive almost invisible tendrils, which, when disturbed, release a ball of needles, which attaches itself to whatever disturbed it. The needles are also thin and each time you move they burrow themselves deeper into you clothing and eventually your skin. I have personally spent lots of time removing them from a dog. Not LaKisha, so far, fingers crossed. I have included some info from a web site on the Organ Pipe Cactus below and also repeated the info on the Saguaro for those of you who were disappointed that I had no photos on the Saguaro post. See below.

But moving on, we then headed east again toward Tucson. We pulled into Tucson just after dark and found another casino to park for the night. This casino is called Casino Del Sol. I recommend it for a couple of reasons. One, if you sign up for a new club card which is free, you get a free meal at the buffet which, on Thursday, is usually $25 because it is seafood night. Wow, what a meal, and free! Two, it is an amazing looking casino. Now I am sitting at a large gazebo in the center of the casinos main room. When I look up I see a morning sky with wispy white clouds on a blue background with birds in the distance. This, although I am inside a casino at night. The main room resembles a courtyard of a large Spanish villa complete with adobe walls, stone accents, and colorful doors and window shutters. It is two stories with balconies and window boxes. Trees, flowers, the works. I am sitting on a stool at a granite bar with an adult beverage in front of me next to my iPad. Lucy is out on the floor trying to lose the house. And I write.

Organ Pipe Cactus:
The organ pipe cactus grows only in the Sonoran Desert. It is found from southwestern Arizona south to Sonora, Sinaloa and Baja California in Mexico. Organ Pipe National Monument in Arizona was created to protect the cactus in its northern most range.

Organ pipe cacti are very sensitive to frost. Because cold air settles in valleys and the desert floor, the heat loving organ pipe cactus grows on southern facing slopes below elevations of 3,000 feet.

The organ pipe cactus gets its name from the many slender, curving vertical stems which resemble the large pipes of an old-fashioned organ. Growing from a base just above the ground, the column-like stems can
grow 25 feet tall, but usually grow to a height of 15 to 20 feet. The stems are about 6 inches in diameter, and rarely branch out. They have 12-17 dark-green ribs. Nine to ten brown 3/8 inch spines grow from close-set areoles on the crest of the ribs, and turn gray with age. The stems continue to grow from their tips, marking each growing season with a slight constriction around the stem.

Like the saguaro, the organ pipe cactus needs shade and protection for a few years during its seedling stages. It depends on “nurse plant” like the desert ironwood, palo verde and triangle-leaf bursage to develop. When the organ pipe cactus matures, its root system will eventually absorb any rain that falls. This deprives the nurse plant of the water it needs, and as a result it becomes stunted or dies.

The organ pipe cactus stores water in its stems to survive the heat and drought of the desert. It has fibrous ribs running vertically up the stem to help keep it upright. When the cactus dies it leaves behind its bleached ribs.

The flower buds of the organ pipe cactus grow from the tip of the stems. The flowers are white or pale lavender in color. They mostly bloom at night and are pollinated by nectar feeding bats, and by morning they close up again. The cactus has many buds which open up on different days so that the flower season can last for many weeks. They bloom annually from May to July.

The red fruits are large and spiny, and ripen in late summer. When they mature, they lose their spines and open to show an edible, red pulp. They are sweet and fleshy, and are eaten by a variety of desert wildlife. It is a favorite with people also, who eat it raw, dried or turn it into jelly. It is also made into syrup and fermented into a wine-like drink.

Native Americans ate the fruit raw or dried it for storage. The wood of the ribs was used for building and turned into torches.

The organ pipe cactus is not endangered in its range, although it is protected in the USA, where it grows only in a small section of southernwestern Arizona.

Saguaro Cactus:
The saguaro cactus (Carnegiea gigantea) is one of the defining plants of the Sonoran Desert. These plants are large, tree-like columnar cacti that develop branches (or arms) as they age, although some never grow arms. These arms generally bend upward and can number over 25. Saguaros are covered with protective spines, white flowers in the late spring, and red fruit in summer.

Saguaros are found exclusively in the Sonoran Desert. The most important factors for growth are water and temperature. If the elevation is too high, the cold weather and frost can kill the saguaro. Although the the Sonoran Desert experiences both winter and summer rains, it is thought that the Saguaro obtains most of its moisture during the summer rainy season.

You find this cactus in southern Arizona and western Sonora, Mexico. At the northern portion of their range they are more plentiful on the warmer south facing slopes. A few stray plants can also be found in southeast California.

The saguaro is not currently listed as threatened or endangered. Arizona has strict regulations about the harvesting, collection or destruction of this species.

With the right growing conditions, it is estimated that saguaros can live to be as much as 150-200 years old.

Saguaro are very slow growing cactus. A 10 year old plant might only be 1.5 inches tall. Saguaro can grow to be between 40-60 feet tall (12-18m). When rain is plentiful and the saguaro is fully hydrated it can weigh between 3200-4800 pounds.

The saguaro is the largest cactus in the United States.

Most of the saguaros roots are only 4-6 inches deep and radiate out as far from the plant as it is tall. There is one deep root, or tap root that extends down into the ground more than 2 feet.

After the saguaro dies its woody ribs can be used to build roofs, fences, and parts of furniture. The holes that birds nested in or “saguaro boots” can be found among the dead saguaros. Native Americans used these as water containers long before the canteen was available.” 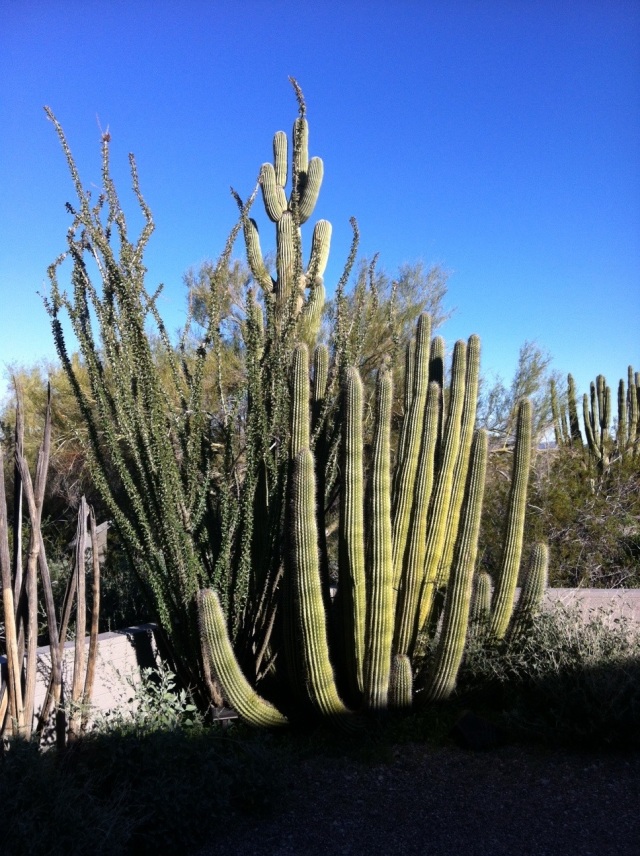 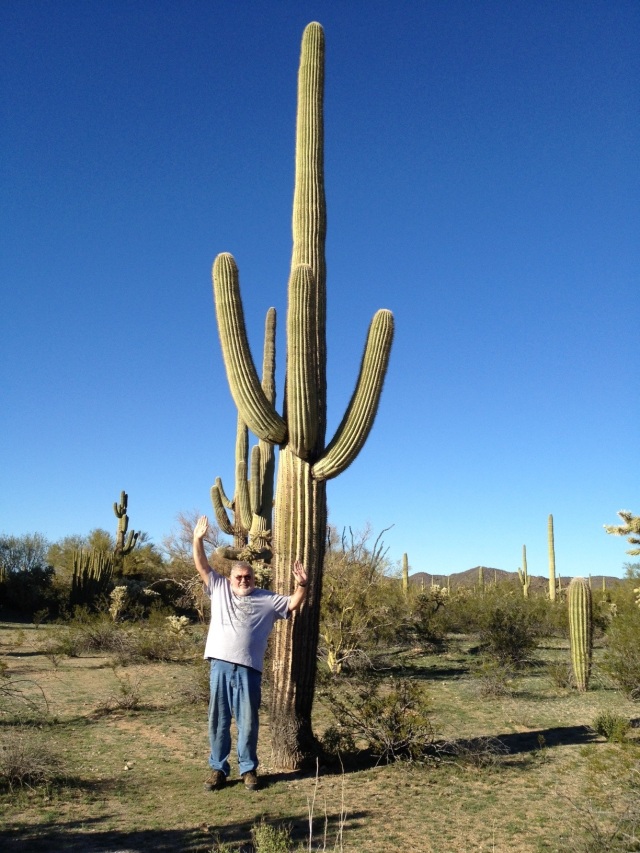 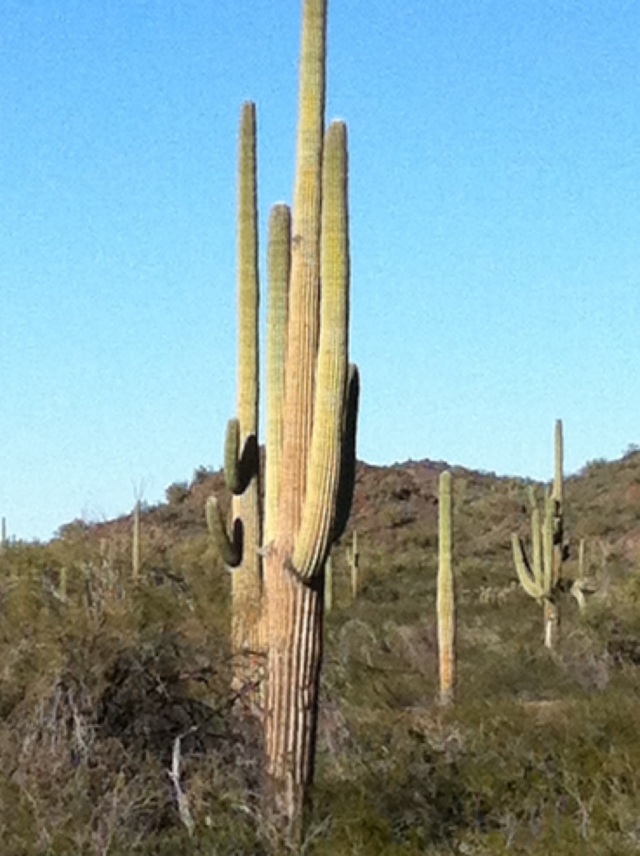 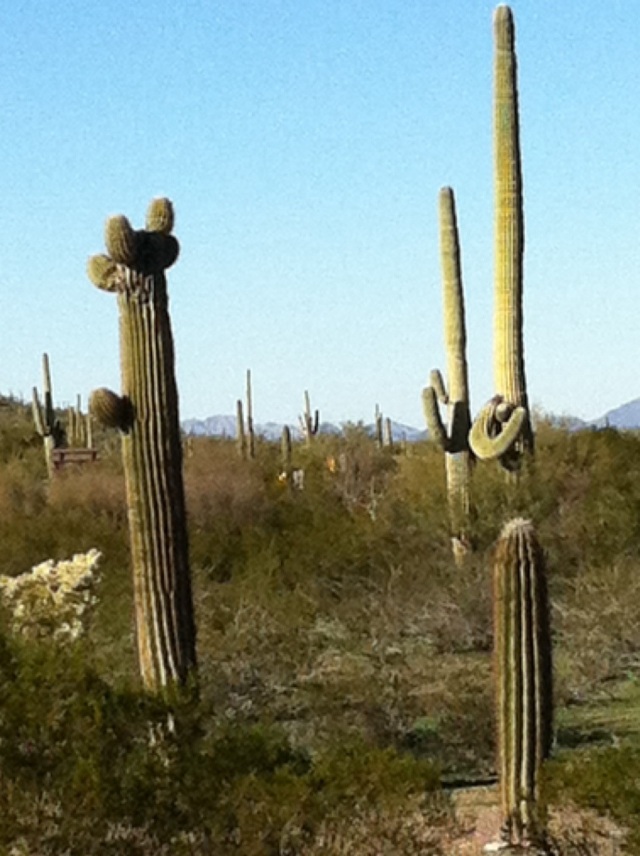 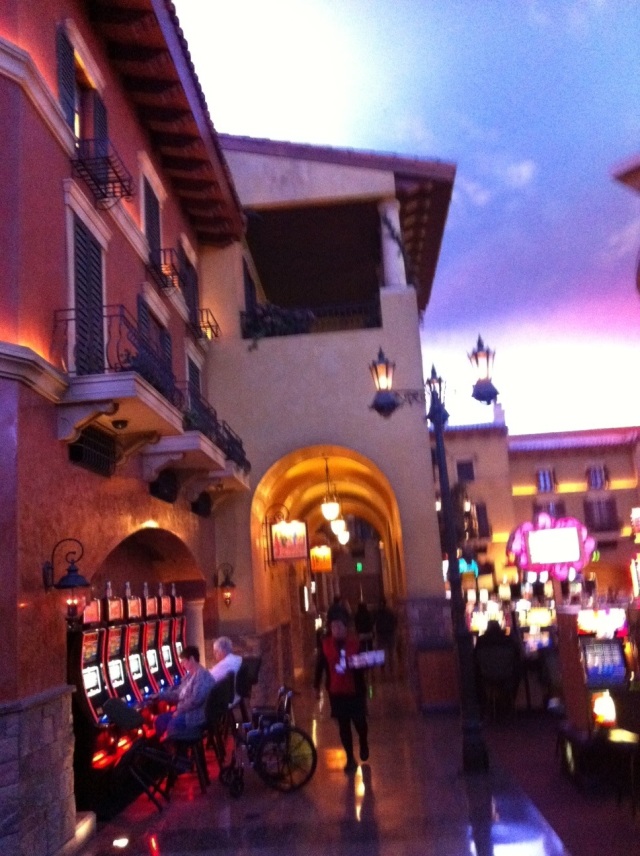 1 Response to Cacti and Casinos