San Antonio, The Reason We Were There

I have not written for a few days because I have been working every available waking hour.  While still in San Antonio, two days before we were scheduled to leave, I was finally given the word to go on a job I was hoping to do while in San Antonio.  The trouble is, it was a job that I estimated would take me about 80 hours to complete.  As hard as I tried, I could not figure out how to fit an 80 hour job into two days.  We extended our stay by one day, but if you take a 72 hour window, subtract 20 hours for sleeping, eating, and the call of nature, you still only have 52 hours for work.  So the plan was to work as much as possible while in San Antonio, take Sunday off for travel to the coast or someplace warmer, then work where ever we landed till the job is done. 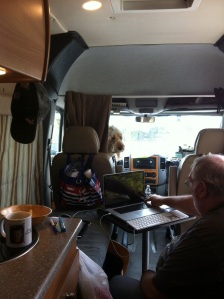 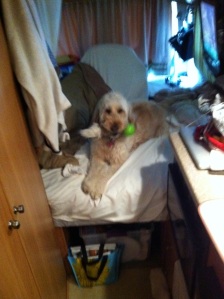 LaKisha was a little bored, but we maintained.

So I worked Friday and Saturday for about 12 or so hours each.  While I was working on Saturday, Lucy went off to play at Sea World with Brian and Trina and Barbara and Trevor and Ben. Yes, there is a Sea World in San Antonio.  Go figure. 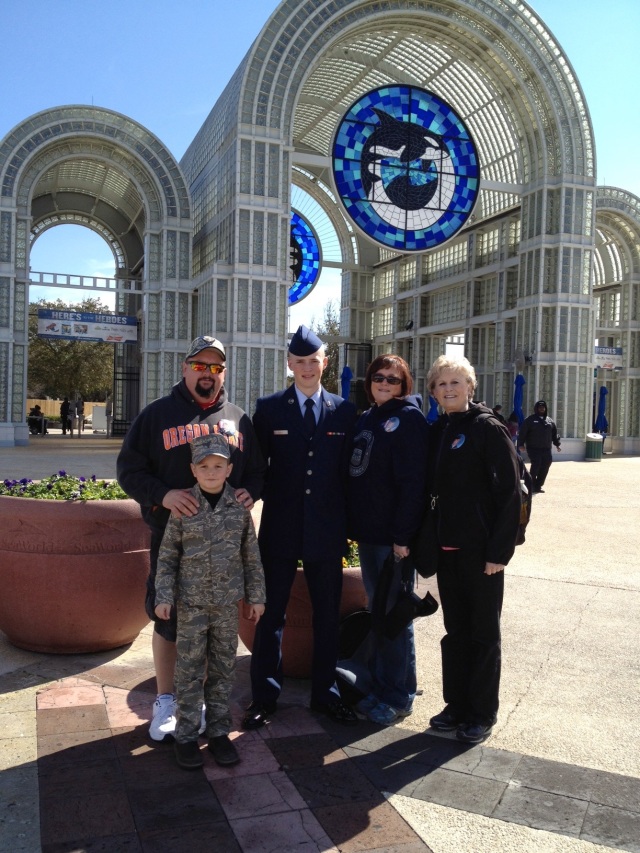 This is really nor Florida

This would be a good place to say how much we appreciated Trina.  What a gracious lady she is.  All the time we were in San Antonio, she drove us around to this and that.  We had to insist adamantly in order to pay for any of the meals we had together.  She braved San Antonio freeway traffic and never uttered a cross word.  What a lady this is. 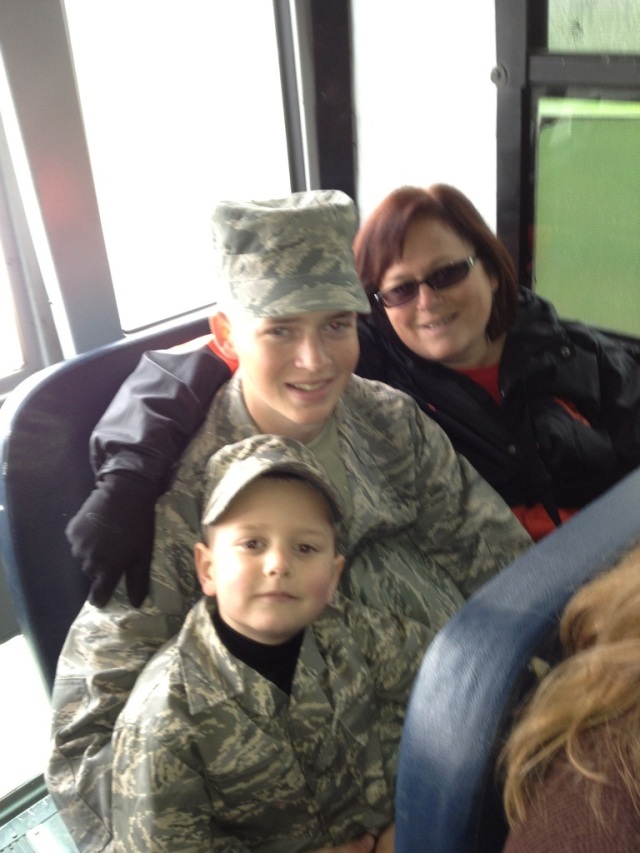 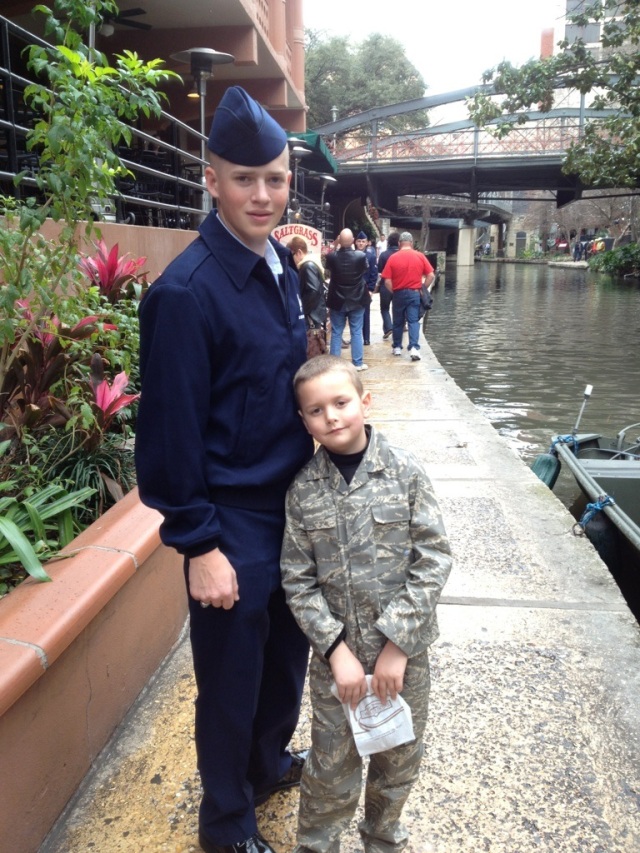 Now I have to back up a bit because some important things happened in San Antonio in the days before my work started.  In fact, the only reason we were in San Antonio was to witness the graduation from boot camp of Trevor Davis.  Trevor’s dad Brian, flew in and joined the family for this occasion.  We attended two ceremonies at Lackland AFB. The first was on Thursday and was a ceremony where the graduates received a coin signifying their future of service in the best Air Force in the world.

There was a very moving tribute to the country and the flag.  After that the airmen were allowed to visit on base with family and friends.  We all went to lunch at a pizza place on the base.  Lucy and I took our leave and the family continued to visit until Trevor had to be back in his dorm.

Lucy and I had rented a car for a day or two to make it easier to get around to the ceremonies and so we could take our leave and leave the family to themselves.  This was the cause of a small, frustrating adventure on the way to the first ceremony.  I have mentioned a bit about the San Antonio freeways and the drivers who inhabit them.  What I did not mention is the confusing signage we encountered along those freeways.  Now you may say that it is not that difficult to confuse Harvey, and you are correct, but this freeway system and it’s confusing signage even confused Gizmo, our trusty GPS device.  Gizmo does not seem to be able to distinguish the difference between the freeway and the access road. She will sometimes tell us to take a left off the freeway where there is no exit.  Or she will tell us to enter a freeway when we are already on the freeway.  We started off at 6:30 am for a 30 minute drive to the AFB for a pre ceremony event.  At 9:30 am we found the AFB and just barely made it to the actual ceremony.  I believe in that 3 hour drive we covered every mile of this freeway system twice, maybe three times.  One of the problems was that we were in the middle of rush hour.  Gizmo would say to exit left to this or that exit in .3 miles. Did you ever try to cross 4 lanes of 65 mph, bumper to bumper traffic in .3 miles?  For that,I need at least a mile and a half and two valium.

The next day we attended the actual graduation.  It was a shorter ceremony, but we had to park and be bussed to the parade grounds where we sat in the partially covered bleachers in a cold drizzle.  We were there a total of three hours including the 45 minute ceremony.  The weather improved and the ceremony was again quite moving and worth the wait.  After the ceremony the airmen were again released to their friends and family, this time for off base liberty.  After this graduation Trevor begins the training for the job he will perform during his service.  He called it Security Forces.  I think it’s kind of like MP, but don’t quote me on that.  We walked over to the lines of people waiting for the bus ride back to the cars.  That’s when Lucy and I began a little adventure.

As we waited for the bus, I noticed that there were lots of people walking instead of waiting for the bus.  I then said something to Lucy for which I will be waiting a long time for her forgiveness.  I said, “Hey, why don’t we just walk.  It can’t be that far.  We can just follow all those other people.”  In my defense I have to say that Lucy agreed with no argument.

So off we went for what we thought would be a pleasant, and much needed walk to the car.  We walked, and we walked, and we walked.  We began to notice that all those other people began to peel off at various buildings here and there.  That was a bit worrying because we kept wondering if the people we were following were really headed for the parking lot.  After about 45 minutes the last group of people we were following turned off at a dorm and we were officially lost.  We walked around several blocks looking for something that looked familiar.  At one point, Trina and Brian and Barb and Trevor and Ben drove by us and smiled and waved, but they were moving at a pretty good clip and could not have seen the look of panic on our faces.  Finally we saw a sign that pointed us to the reception center, which was the building we were parked near. And about 1/2 mile later we found our rental car across from that building.  We fell into the car, caught our breath and headed for the van.  We had just walked for 1 hour and 15 minutes in giant circles.  Lucy has not spoken to me since. Just kidding, she began speaking softly again after about 12 hours. Just kidding again.

So we traveled on Sunday with the goal of finding a nice place to stay for a week where I could work and Lucy could walk to nearby beaches or shops.  We were not successful in that quest.  After looking at a few places along the coast, all of which were  either far from civilization or, unacceptable in some other way,  we finally stopped at a casino in a place called Vinton, Louisiana.  It was late and we spent the night there.  We got up in the morning and headed east toward Lake Charles.  It was a little bit of a nervous drive.  The wind was blowing us pretty fiercely and Louisiana has lots of very high bridges.  They seem to come up without warning and take you much higher than seems necessary.  Do you know that if it is windy on the ground where you have trees and such breaking the wind, it is even more windy up on a high bridge with no wind breaks available?

As we began to look for a park to stay in, we discovered something else.  It is Mardi Gras.  Every park we found, which fit our needs, was full until after Mardi Gras.  We finally settled for a place just west of Lake Charles called Whispering Meadows.  It is a very nice park, but it only had 4 days available and there is nothing within walking distance for Lucy to enjoy while I work.  But we snapped it up sight unseen and here we are.  The other trouble is that now I have to complete my project in four days because the schedule does not allow another travel day.  So I worked till midnight on Monday, another 14 hours on Tuesday, and 13 more on Wednesday. It is Wednesday night now and I have enough done that I am confident I can finish it in about 10 hours tomorrow.  We have to leave on Friday.  I am hoping that I don’t have any work for the next few days so I can enjoy Louisiana with Lucy.  Working on the road is a little bit less convenient, but it is working out well so far and it is the only way we can afford to take a six month trip so I’m okay with it.  We are having a blast and lots of adventures so it is well worth a little extra effort when I work.

Not much happening here except work so I probably won’t write again till Friday night.

This entry was posted in Travel Logs. Bookmark the permalink.